Being able to identify individual organisms adds incredible depth to the wildlife watching. It helps immerse you in their world and really care about their lives. I loved being able to watch my pair of swans VGY and ZNY. Their orange DARVIC tags made identifying them very easy and over time they came to accept me as much as I did them and would always swim over to see me and were much more tolerant of me around their cygnets than others. Sadly VGY and ZNY ae long passed and the local swans arent tagged anymore, it takes a lot of training to ring swans but I can still identify some by their facial markers.
Likewise with Half-Tail the dominant fox on my trail cameras was a great individual to get to know. In many cases organisms all look alike and you need to spend an amazing amount of time with them to see the subtle signs. I have spent many hours trying to identify individual badgers on the trail cam but without definite features it can be very hard. The best kind of ID features are physical characteristics that are likely to be permanent, easy to see and unique, defects are often the best and it is such a defect that has helped me to identify an individual cormorant.
This Cormorant I have named Carbo. Their distinctive feature is their beak. I have posted before about beak deformities (Read it here)and this week I not only saw a deformed Cormorant but a deformed beak Magpie! 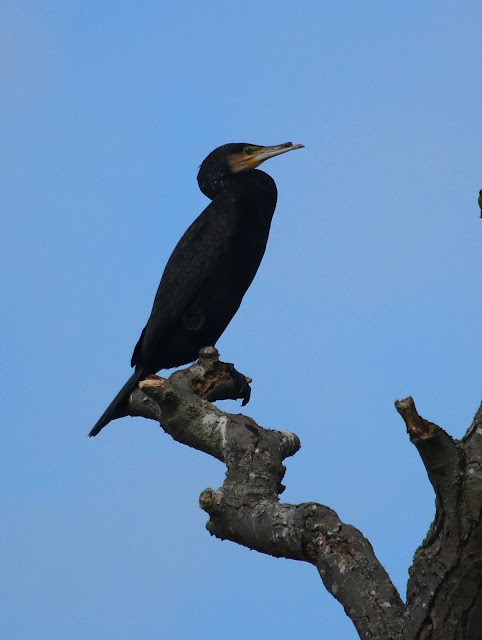 Carbo can be identified by the fact that he is missing the tip of his upper mandible. I do not think this was a birth defect, it was probably caused by some kind of accident maybe a collision?
Cormorants are a fascinating species. To me they look so very primitive, I can see them around in the very earliest times of bird evolution. Its something about their very 'dinosaury' look. Their eyes seem very reptilian and their feathers form a kind of scale like pattern also they are less evolved than other waterbirds. They lack a waterproof coating to their feathers meaning that although they are excellent swimmers and underwater divers they must dry themselves out after each immersion. This is why they are commonly seen with wings outspread drying out. It was this cross like shape that endeared them to Knights, some of whom adopted them into their coats of arms.
Originally viewed as coastal birds Cormorants unlike their cousins, the Shag, have adapted to inland life. In fact, for almost all of their European range the Cormorant remains a coastal and estuarine habitats only in the UK do they spread right across the country.
Cormorants were first sighted at the Saxon Mill when I first started recording in 2003 with previous sightings being in Wales or at Brandon Marsh. Over the years they have become an increasingly common sight. This year they have been even more prevalent and over the past few weeks a regular visitor. Carbo has a preference for the upstream stretch of the river and in the picture above loves to sit on a perch a top an old dead tree on the opposite bank.
This week I spotted Carbo fishing in the river and then again perched on his second favourtite perch, an old stump in the river. I know this is where Carbo comes regularly given the large white guano stains on the trunk. 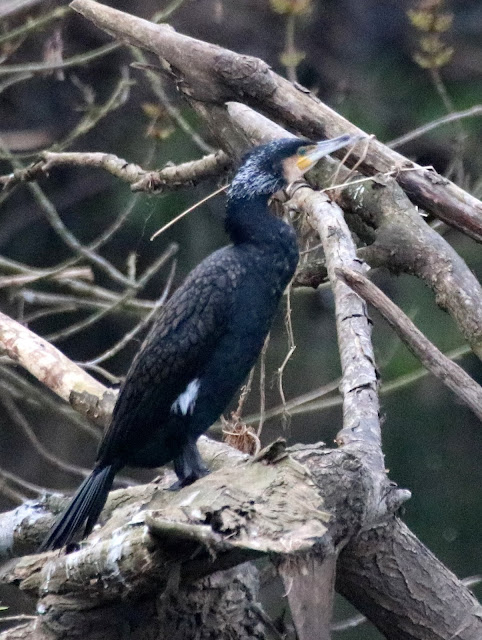 In this photo we can see Carbo a little closer up. This photo was taken on the 18th April, about a month since the other photo and we can now see that they have entered breeding plumage as evidenced by the white patch on the side, something that I had never noticed on a Cormorant before. I keep using the pronoun 'They' as it is very hard to sex a Cormorant.
The beak deformity doesn't seem to have been hampering Carbo even through it means he has lost the hooked beak tip. There are plenty of fish in the Avon, Carbos presence along with otter and heron attest to this and as I see young cormorant most autumns it is likely that they breed somewhere along this stretch, it is my guess that it is a little further up river.
Being able to identify Carbo means that I may be able to find out more about their life and come to understand them better.
Posted by Mark Smith at 06:27