The General Election and the Environment


With just 11 days until Election Day I thought it was about time I had a look at the environmental policies of the three main parties.  I went through each manifesto and tried to extract the relevant policies and statements. The Labour manifesto was the easiest to read with their whole first section entitled 'A Green Industrial Revolution', this was a promising start and laid down an early marker, very few parties put the environment so high on their agenda.

The Liberal party had the most environmental policies and whilst the Conservative manifesto was harder to decipher had some very good policies. Interestingly there are several points on which two or more parties agreed. Some of the policy areas are bold statements of legislation or action but many are vague notions of hopes and wishes and we all know what they can turn into.

I have laid out the findings in the grid pictured below: 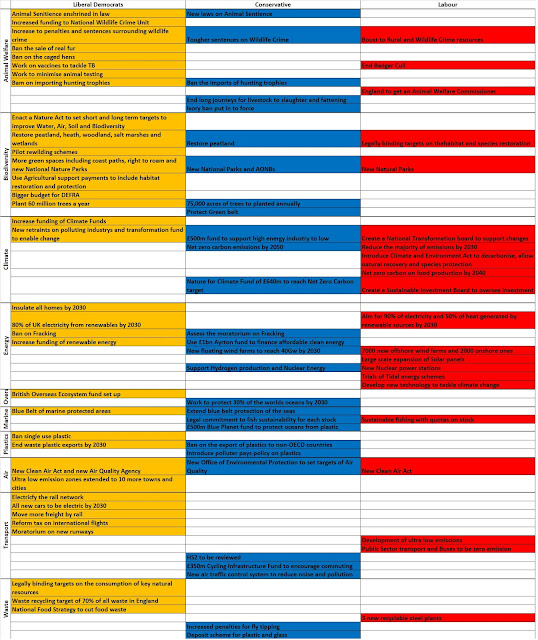 Overall this hasn't made my decision of who to vote for any easier. Only labour categorically plans to cancel the Badger Cull and no party talks of rescinding HS2 both of my two big policy areas. The Conservatives mention reviewing the HS2 but early details show that HS2 will continue. The Liberals have good biodiversity plans and labour is better on Climate with the Conservatives better on Plastics and Marine protection.

I know the environment will not be the only policy area of interest to most people but it is important that it is considered. With Brexit possible there is a massive opportunity to strengthen our environmental laws and equally as big of a risk of them being watered down or lost.

Take time to read the manifestos and take time to look at the environmental policies. We need action now and our government whatever colour it maybe needs to act. They have all laid out their plans for us to see and now it comes down to reading, understanding them and forcing them to enact them when elected. The last sombre point I will make is trust, many parties renege on their manifesto pledges, we should not allow this, we should hold them to account. The time of faith in our politicians seems to be over and so evaluating which party is to be trusted to work for our environment and planet is up to each individual.

Good luck in your deliberations and I hope this analysis helps you in small way. Take your time, think and vote intelligently.
Posted by Mark Smith at 12:27

Email ThisBlogThis!Share to TwitterShare to FacebookShare to Pinterest
Labels: Politics